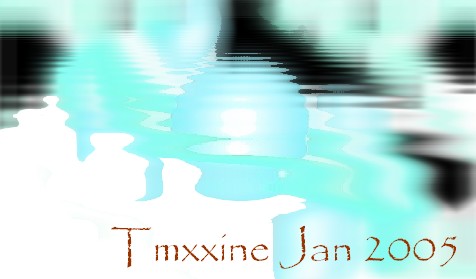 "A physicist is an atom's way of knowing about atoms." -- George Wald

Our goals simply stated are:

The need for a DIDO hardware model established Tmxxine ProjeX e-mail forum which introduced the Tmxxine Laxmi Foundation for future activation as a practical means towards funding support.

"Well I think if we achieved practical time travel

it would have to be very strongly controlled and licensed

and taxed probably, because the idea of people treating history

to go to anywhere, I think is positively alarming."

For the future the idea of a static web begins to fade as non editable web pages (pre-wiki) are recognized as anachronistic.

The OS (Open Source Operating System) will emerge in the next 5 years. Whether it is WinX that swallows Linux or Windows running on integrated Linux hardware will depend on memes and other preparation.

The real power will reside as predicted with AI and wikia style search engines. The future works. It always has.

At present, more can be stored online, in terms of research and links

The acceleration of a wave into a future continuum (and then back again) is the first necessity and feasibility, achieved at low amplitude

The control panel is now clearier in design potential, needing an increase and slowing of light This would then be linked to further stabilisations most of which would be automated

Theoretical physics has now been superceded by design applications - in other words technology is moving ahead of the theorists whilst they continue calculating. The quantum and other theories will verify experimental data which should be our priority

http://sfx-images.mozilla.org/affiliates/Buttons/125x50/takebacktheweb_125x50.png
Retrieved from "https://peace.fandom.com/wiki/Tmxxine?oldid=10473"
Community content is available under CC-BY-SA unless otherwise noted.