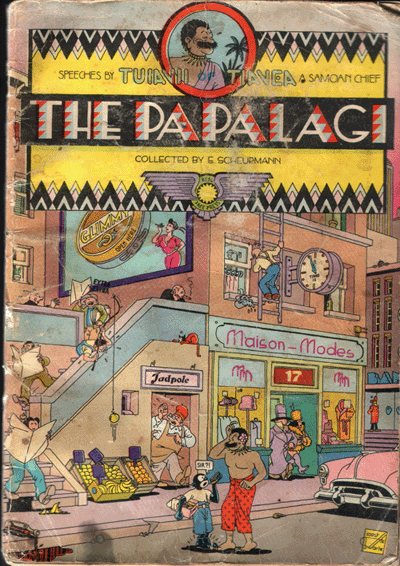 The writer called these speeches, The Papalagi, which means, the White Men or the Gentlemen. These speeches by Tuiavii of Tiavea were not delivered as yet, but the essence had been written down in the native language, out of which the first German translation was made.

Tuiavii never intended to have his speeches published for the Western public, nor to have them printed anywhere at all. They were strictly meant for his Polynesian people. Yet I have, without his consent and definitely in disregard of his wishes, taken the liberty to bring these speeches of a Polynesian native to the attention of the Western reader, convinced, that for us white people with our Western civilization it could be very worthwhile to find out how a man who is still closely bound to nature sees us and our culture.

Through his eyes we look and see ourselves from a standpoint we can never occupy again. Certainly there will be people, specially culture-freaks who will deem his point of view childish, perhaps even ignorant; but those of you who are more worldly-wise, and above all feel more humility, will be moved to reflection and self-criticism by much of what is going to be said. Because his wisdom is the fruit of simplicity, the greatest grace that God can bestow upon a man, showing him the things that science fails to comprehend.

These speeches were no less than a calling out to all the peoples of the South Pacific to cut off all their ties with the so-called enlightened people of European stock. Deep within, Tuiavii, the scorner of Europeans held the steadfast conviction that his forefathers had committed a grave error by letting themselves be enticed by European culture. He is like the maiden of Fagaasa who, seated high upon a cliff, saw the first white missionaries coming, and with her fan motioned them to leave: "Away with you, you criminal devils!". He also saw Europe as the dark demon, the big defoliator, from whom mankind should protect itself, if it wants to remain as pure as the Gods.

When I first met Tuiavii, he was living a peaceful life, secluded from the European world on his tiny, out-of-the way island called Upolu, one of the Samoan islands, in the village Tiavea of which he was chief. The first impression he made was of a big, kind-hearted giant. Almost 6 feet 2, and built like a brick outhouse. But his voice was soft and gentle as a woman's and his large, deepset eyes, overshadowed by bushy eyebrows had a slightly vacant stare. But when suddenly spoken to, they would light up and betray his warm and sunny heart.

In no outward manner was Tuiavii markedly different from his brothers. He drank his kava (1), went to loto (2) in the morning, ate bananas, toras and yams and observed all native customs and rituals. Only his few intimate friends knew what was brewing inside his head and what was struggling to come to the light, whenever he lay, dreaming it seemed, on his housemat.

In general the native lives like a child, purely in the visible world, without questioning either himself or his surroundings, but Tuiavii had an extraordinary character. He had risen high above his fellows, because he lived consciously and therefore possessed that inner drive that sets us apart from primitive peoples, more than anything else does.

Because of his being his own kind of man, Tuiavii had felt the wish arise to get to know more of that far-away Europe. That desire had been burning inside of him ever since his schooldays at the Marist's mission and was satisfied only when he had become a grown up man. He joined a group of ethnologists who went back to Europe after their studies, and that way- got to visit, one after the other, most of the states in Europe, where he became thoroughly acquainted with their culture and national peculiarities. Time and again I marveled at the accuracy with which he remembered even the smallest detail. Tuiavii possessed to a high degree the gift of sober and unprejudiced observation. Nothing could dazzle him; he never let himself be steered away from the truth by words. In fact he saw everything in its own original form, though throughout all his studies he never could abandon his own standpoint.

Although I was a close neighbour of his for more than a year, being a member of his village-community, Tuiavii took me into his confidence only after we became friends. After he'd entirely overcome, even forgotten the European in me. When he had convinced himself that I was ripe for his simple wisdom and wouldn't laugh at him (something I never did), only then did he consider me worthy enough to listen to fragments of his writings. He read them aloud to me, without any pathos, as if it were a historical narration. Though for just this reason, what he was saying worked itself into my mind and gave birth to the wish to retain the things I have heard.

Only much later did Tuiavii come to trust me with his notes and gave me permission to translate them into German. He thought I wanted to use them for my personal studies and never was to know that the translation as it were, would be published. All these speeches are no more than rough drafts and together do not form a well-composed book. Tuiavii has never seen them in any other form. Only when he had all the material neatly filed away in his head and all the things standing out clearly, did he want to start his "mission" as he called it, among his fellow Polynesians. I had to leave the islands before he started out on his quest.

Though I've seen it as my duty to render as literal a translation as possible and have not altered a syllable in the composition of the speeches, I am yet aware that the directness originality and uniqueness of his wording have suffered greatly. Anyone who has ever tried to bring something over from a primitive language into a modern one, will immediately recognize the problems involved in reproducing childlike utterances so as not to make them seem stupid or foolish.

Tuiavii, the uncultivated island-dweller, regarded European culture as a deviation, a one way road to nowhere. This might sound somewhat inflated but for the fact that it was all said with that wonderful simplicity that betrayed the weakness of his heart. It is true that he warns his countrymen and even tells them to shake off European domination. But in doing so, his voice is filled with sadness and everything indicates that his missionary zeal springs from his love of humanity and is not out of hatred. "You fellows think that you can show us the light," he said to me when we were together for the last time, "but what you really do is try to drag us down into your pool of darkness". He regarded the comings and goings of life with a child's honesty and love of the truth and so encountered discrepancies and moral shortcomings and by storing them all in his memory, they became lessons for life to him. He cannot come to understand where this supposed value of European culture resides, when it alienates people from themselves and makes them false, unnatural and depraved. When he sums up what civilization has brought us, starting with our appearance, as he would do when describing an animal, calling everything by its appropriate name, a very un-European and irreverent attitude; then he's picturing us in a way that, however incomplete is not incorrect, so that we do not know who to laugh at: the painter or his model.

This childlike, openhearted approach to reality, along with his complete lack of reverence is where I believe the true value of Tuiavii's speeches to us Westerners resides; that's why I feel that their publication is justified. The world wars have made us Westerners skeptical towards ourselves, we also begin to wonder about the intrinsic value of things and start to doubt whether we can ever really achieve our highest ideals through our civilization. Therefore we shouldn't consider ourselves to be so civilized and come down from our spiritual level to the way of thinking of this Polynesian from the Samoan islands, who is not as yet burdened down with an overdose of education and who is still original in his feeling and thoughts, and who wants to make us feel that we killed the Godlike essence of our being and have replaced it with idols.

See also a Critic's View. Discussion and Comments are encouraged..

2. How The Papalagi Cover Their Flesh With Numerous Loincloths And Mats

3. Stone Crates, Stone Islands, Fissures And The Things In Between

4. The Round Metal And The Heavy Paper

5. The Papalagi Are Poor Because Of Their Many Things

6. The Papalagi Have No Time

7. The Papalagi Made God Poor

8. The Great Spirit Is Stronger Than Machines

9. Professions Of The Papalagi And The Confusion That Is Their Result

10. The Places Of Pseudo-Life And The ‘Many Papers‘

11. The Severe Disease of Thinking

12. The Papalagi Want To Drag Us Down Into Their Darkness

Retrieved from "https://peace.fandom.com/wiki/The_Papalagi?oldid=11446"
Community content is available under CC-BY-SA unless otherwise noted.