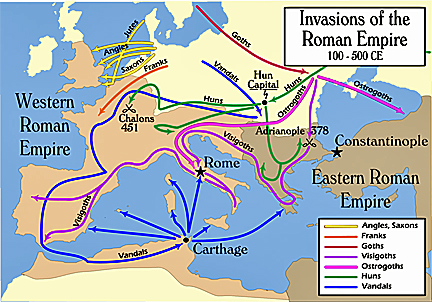 The Migration Period, also called Barbarian Invasions or Völkerwanderung (German for "wandering of peoples"), is a name given by historians to a human migration which occurred within the period of roughly AD 300–700 in Europe, marking the transition from Late Antiquity to the Early Middle Ages.


The migration included the Goths, Vandals, Alans, Suebi and Franks, among other Germanic, Iranian and Slavic tribes. The migration may have been triggered by the incursions of the Huns, in turn connected to the Turkic migration in Central Asia, population pressures, or climate changes.


In the 3rd century the Roman Empire almost collapsed and its army was becoming increasingly Germanic in make-up, so that in the 4th century when Huns pushed nomadic German tribes westward, they spilled across the Empire's borders and began to settle there. The Visigoths settled in Italy and then Spain, in the north the Franks settled in to Gaul and western Germany, and in the 5th century Scandinavians such as the Angles, Saxons and Jutes invaded Britain. By the close of the 6th century the Western Roman Empire was almost completely replaced with smaller less politically organized, but vigorous, Germanic kingdoms.


Although these kingdoms were never homogeneous, they shared certain common cultural features. Traditionally nomadic, they began to settle and become farmers and fishermen. Archaeological evidence shows no tradition of monumental artwork, such as architecture or large sculpture, preferring instead "mobile" art with a utilitarian function, such as weapons, tools and jewelry. The art of the Germanic peoples is almost entirely personal adornment, portable, and taken to the grave where it would act as an appeasement to dead spirits to protect the living.
http://en.wikipedia.org/wiki/Migration_Period_art 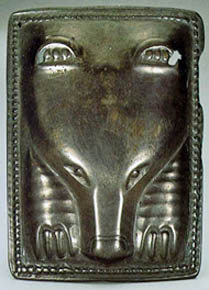 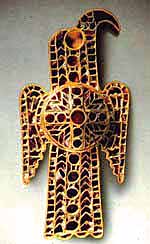 Migration Period art (aka "Barbarian art") is the artwork of Germanic peoples during the Migration period of 300 to 900. It includes the Migration art of the Germanic tribes on the continent, as well the Hiberno-Saxon art of the Anglo-Saxon and Celtic fusion in Great Britain. It examines the different types of art including the polychrome style and the animal style. Migration Period art is one of the major periods of Medieval art.
http://www.crystalinks.com/migrationart.html 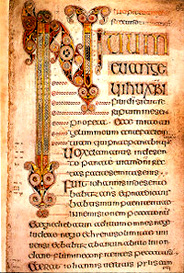 
The remarkable historical period now called "Charlemagne's renovation" - an energetic, brilliant emulation of the art, culture, and political ideals of Christian Rome - occurred during the late eighth and early ninth century. Out of the confusions attendant on the migrations and settlement of the barbarians, Charlemagne's immediate forerunners built, by force and political acumen, a Frankish empire that contained or controlled a large part of western Europe. Charlemagne, like Constantine, whom he often consciously imitated, wished to create a unified Christendom as a visible empire. He was crowned by the pope in Rome in 800 as head of the entity that became the Holy Roman Empire, which, waxing and waning over a thousand years and with many hiatuses, existed as a force in central Europe until its destruction by Napoleon in 1806.

Illumination showing Charlemagne and Roland in mythic status,
riding off to fight the Muslims in Spain.
From the text 'The Song of Roland', 12th century

Charlemagne was a sincere admirer of learning and the arts. To make his empire as splendid as that of Rome (he thought of himself as successor to the caesars), he invited to his court at Aachan the best minds and finest craftsmen of western Europe and the Byzantine East. Although unlettered and scarcely able to write, he could speak Latin fluently, and loved the discourses he frequently held with the learned men he gathered around him. Charlemagne also must have admired the splendid works created in the scriptorium of the school he established in his palace. One of his dearest projects had been the recovery of the true text of the Bible, which through centuries of miscopying by ignorant scribes, had become almost hopelessly corrupt. Part of the great project, undertaken by the renowned scholar Alcuin of York at the new monastery at Tours, was the correction of the actual script used, which, in the hands of the scribes, had become almost unreadable. The Carolingian rehabilitation of the inherited Latin script produced a clear, precise system of letters; the letters on this page are descended from the alphabet renovated by the scribes at Tours.


Charlemagne, his successors, and the scholars under their patronage imported whole libraries from Italy and Byzantium. The illustrations in these books must have astonished northern painters, some of whom had been trained in the Hiberno-Saxon manner of pattern making, while others were schooled in the weak and inept Frankish styles of the seventh and eighth centuries. Here they were confronted suddenly with a sophisticated realism that somehow had survived from the Late Antique period amidst all the denaturing tendencies that followed. 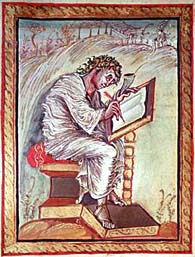 The famous Coronation Gospels (the Gospel Book of Charlemagne, formerly in the Imperial Treasury in Vienna)may have been a favorite of Charlemagne himself; an old tradition records that it was found on the knees of the dead emperor when, in the year 1000, Otto III had the imperial tomb at Aachen opened. The picture of St. Matthew composing his gospel descends from ancient depictions in sculpture and painting of an inspired philosopher or poet seated and writing. It's technique is of the same antiquity - deft, illusionistic brushwork that easily and accurately defines the masses of the drapery as they wrap and enfold the body beneath... and the whole composition seems utterly out of place in the north in the ninth century. How were the native artists to receive this new influence, so alien to what they had known and so strong as to make their own practice suddenly obsolete?
Another St. Matthew, in a gospel book made for Archbishop Ebbo of Reims, may be an interpretation of a prototype very similar to the one used by the Coronation Gospels master, for it resembles it in pose and in brushwork technique. But there the resemblance stops. The Classical calm and solidity have been replaced by an energy that amounts to frenzy, and the frail saint almost leaps under its impulse. His hair stands on end, the folds of his drapery writhe and vibrate, the landscape behind him rears up alive. He appears in frantic haste to take down what his inspiration (the tiny angel in the upper-right-hand corner) dictates. All fidelity to bodily proportions or structure is forsaken in the artist's effort to concentrate on the act of writing; the head, hands, ink horn, pen, and book are the focus of the composition. This presentation contrasts strongly with the settled pose of the Matthew of the Coronation Gospels, with it's even stress, so that no part of the composition starts out at us to seize our attention. The native power of expression is unmistakable and will become one of the important distinguishing traits of Late Medieval art.
Art Through The Ages, ninth edition, La Croix, Tansey, Kirkpatrick 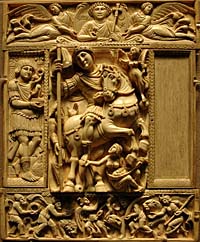 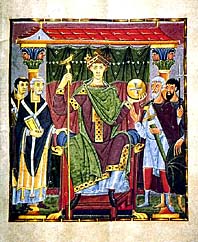 In pre-romanesque Germany, the prevailing style was what has come to be known as Ottonian art. With Ottonian architecture, it is a key component of the Ottonian Renaissance (circa 951 – 1024) named for the emperors Otto I, Otto II, and Otto III. The style persisted past the Ottonian emperors, however, and into the reigns of the early Salians.


After the decline of the Carolingian Empire, the Holy Roman Empire was re-established under the Saxon Ottonian dynasty. From this emerged a renewed faith in the idea of Empire and a reformed Church, creating a period of heightened cultural and artistic fervor. It was in this atmosphere that masterpieces were created that fused the traditions from which Ottonian artists derived their inspiration: models of Late Antique, Carolingian, and Byzantine origin.


Much Ottonian art reflected the dynasty's desire to establish visually a link to the Christian rulers of Late Antiquity, such as Constantine, Theoderich, and Justinian as well as to their Carolingian predecessors, particularly Charlemagne. This goal was accomplished in various ways. For example, Ottonian ruler portraits typically include elements, such as province personifications, or representatives of the military and the Church flanking the emperor, with a lengthy imperial iconographical history. It is instructive to compare, for instance, the early Byzantine portrait of Justinian on the Barberini ivory with the portrait of Otto III in the Munich Gospels of Otto III
from:http://en.wikipedia.org/wiki/Ottonian_art 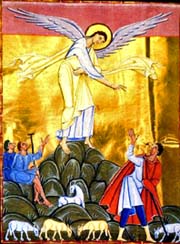 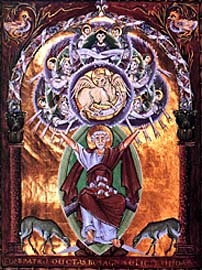 left: Annunciation to the Shepherds, from Lectionary of Henry II, 1002-1014
right: from Gospel Books of Otto III

German art after the fall of Rome was first a lot like [Barbarian] art. By the 900's AD, German art is often called "Ottonian" after the German emperors who were ruling at that time. Because these Otto emperors thought of themselves as being Holy Roman Emperors, putting the old Roman Empire back together, they liked art that looked Roman, or that at least reminded them of ancient Rome (while still being clearly Christian).
Carr, Karen. "(Medieval German Art)" Kidipede - History for Kids. 2007. June 23, 2008. http://www.historyforkids.org/learn/medieval/art/german.htm

Retrieved from "https://peace.fandom.com/wiki/Peace_Art_4?oldid=11150"
Community content is available under CC-BY-SA unless otherwise noted.