Art of the Ancient Egyptians
Ancient Egyptian Art refers to the style of painting, sculpture, crafts and architecture developed by the civilization in the lower Nile Valley from c.5000 BCE to c.300 BCE. This period was divided into eight or nine periods, sometimes referred to as kingdoms. Ancient Egyptian art as expressed in painting and sculpture was both highly stylized and symbolic. Much of the surviving art comes from tombs and monuments and thus there is an emphasis on life after death and the preservation of knowledge of the past.
In a more narrow sense, Ancient Egyptian art refers to the canonical 2nd and 3rd Dynasty art developed in Egypt from 3000 BCE, and used until the 3rd century BCE. Most elements of Egyptian art remained remarkably stable over that 3000 year period. There wasn't strong outside influence. The same basic conventions and quality of observation started at a high level and remained near that level over the period.
Because of the highly religious nature of ancient Egyptian civilization, many of the great works of ancient Egypt depict gods, goddesses, and Pharaohs, who were also considered divine. Ancient Egyptian art is characterized by the idea of order. Clear and simple lines combined with simple shapes and flat areas of color helped to create a sense of order and balance in the art of ancient Egypt. 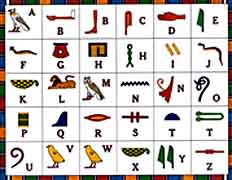 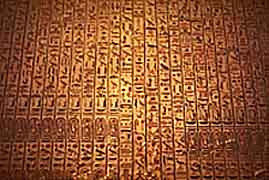 Symbolism also played an important role in establishing a sense of order. Symbolism, ranging from the Pharaoh's regalia (symbolizing his power to maintain order) to the individual symbols of Egyptian gods and goddesses, is omnipresent in Egyptian art. Animals were usually also highly symbolic figures in Egyptian art. Colors were more expressive rather than natural: red skin implied vigorous tanned youth, whereas yellow skin was used for women or middle-aged men who worked indoors; blue or gold indicated divinity because of its unnatural appearance and association with precious materials; the use of black for royal figures expressed the fertility of the Nile from which Egypt was born. Stereotypes were employed to indicate the geographical origins of foreigners.
Ancient Egyptian art forms are characterized by regularity and detailed depiction of human beings and nature, and were intended to provide company to the deceased in the “other world”. Artists endeavored to preserve everything of the present time as clearly and permanently as possible. Completion took precedence over style. Some art forms present an extraordinarily vivid representation of the time and the life, as the ancient Egyptian life was lived thousand of years before.
Egyptian art in all forms obeyed one law: the mode of representing man, nature and the environment remained almost the same for thousands of years and the most admired artists were those who replicated most admired styles of the past. 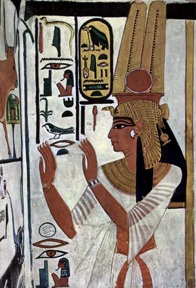 some of the above quoted and paraphrased from:
http://en.wikipedia.org/wiki/Art_of_Ancient_Egypt 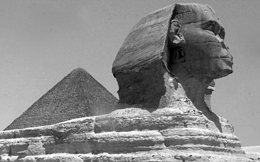 The Pyramids of Giza are the only surviving member of the original Seven Wonders of the World ... They include three Old Kingdom burial structures and the Sphinx, built by the 4th dynasty pharaohs Khufu (also spelled Cheops by the Greeks) and known as the Great Pyramid, Khafre (spelled Chephren), and Menkaure (spelled Mycerinus) between 2613-2494 BCE.
from: http://archaeology.about.com/od/gterms/g/gizaplateau.htm


The art of ancient Greece has exercised an enormous influence on the culture of many countries from ancient times until the present…Well into the 19th century, the classical tradition derived from Greece dominated the art of the western world.
The art of Ancient Greece is usually divided stylistically into four periods: the Geometric, Archaic, Classical, and Hellenistic. The Geometric age is usually dated from about 1000 BCE, although in reality little is known about art in Greece during the preceding 200 years (traditionally known as the Dark Ages), the period of the 7th century BCE, witnessed the slow development of the Archaic style as exemplified by the black-figure style of vase painting. The onset of the Persian Wars (480 BCE to 448 BCE) is usually taken as the dividing line between the Archaic and the Classical periods, and the reign of Alexander the Great (336 BCE to 323 BCE) is taken as separating the Classical from the Hellenistic periods.

Pottery
The Ancient Greeks made pottery for everyday use, not for display; the trophies won at games, such as the Panathenaic Amphorae (wine decanters), are the exception. Most surviving pottery consists of drinking vessels such as amphorae, kraters (bowls for mixing wine and water), hydria (water jars), libation bowls, jugs and cups. Painted funeral urns have also been found. Miniatures were also produced in large numbers, mainly for use as offerings at temples. In the Hellenistic period a wider range of pottery was produced, but most of it is of little artistic importance. 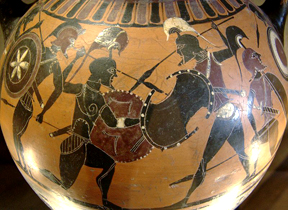 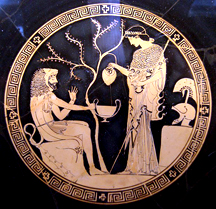 The range of colours which could be used on pots was restricted by the technology of firing: black, white, red, and yellow were the most common. In the three earlier periods, the pots were left their natural light colour, and were decorated with slip that turned black in the kiln. The fully mature black-figure technique, with added red and white details and incising for outlines and details, originated in Corinth during the early 7th century BCE, and was introduced into Attica about a generation later; it flourished until the end of the 6th century BCE. The red-figure technique, invented in about 530 BCE, reversed this tradition, with the pots being painted black and the figures painted in red. Red-figure vases slowly replaced the black-figure style. Sometimes larger vessels were engraved as well as painted.
http://en.wikipedia.org/wiki/Ancient_Greek_Art

The development of 3-dimensional sculpture in Greece can be traced to the 9th c. BCE, originally small scale representations of animals and humans in copper, bronze, lead, ivory and terra cotta. These trends eventually transformed into large, highly realistic figures, often made of marble, and often used to decorate architecture, circa approximately 30 BCE.
It can be observed that Greek sculpture was very often emulated by the Romans, who copied actual Greek sculptures verbatim quite frequently. 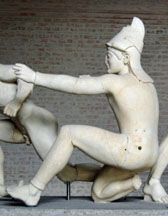 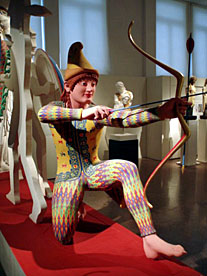 Trojan Archer from the Temple of Aphaia on Aegina, the original and the colored reconstitution

Most Greek sculptures were painted in strong colours. The paint was frequently limited to parts depicting clothing, hair, and so on, with the skin left in the natural colour of the stone, but it could also cover sculptures in their totality. The painting of Greek sculpture should not merely be seen as an enhancement of their sculpted form, but has the characteristics of a distinct style of art. For example, the pedimental sculptures from the Temple of Aphaia on Aegina have recently been demonstrated to have been painted with bold and elaborate patterns, depicting, amongst other details, patterned clothing.

Painting
The most respected form of art, according to ancient Greek authors like Pliny, were individual, mobile paintings on wooden boards, technically described as panel paintings. The techniques used were encaustic (wax) painting and tempera. We also find these techniques used in the making of Byzantine icons.
Unfortunately, due to the perishable nature of the materials used and the major upheavals at the end of antiquity, not one of the famous works of Greek panel painting has survived, nor even any of the copies that doubtlessly existed, and which give us most of our knowledge of Greek sculpture. The most important surviving Greek examples are the fairly low-quality Pitsa panels from circa 530 BCE.

6th c. BCE representation of an animal sacrifice scene in Corinth, One of the Pitsa panels, the only surviving panel paintings from Archaic Greece

The tradition of wall painting in Greece goes back at least to the Minoan and Mycenaean Bronze Age, with the lavish fresco decoration of sites like Knossos, Tiryns and Mycenae. It is not clear, whether there is any continuity between these antecedents and later Greek wall paintings.
Greek wall painting tradition is also reflected in contemporary grave decorations in the Greek colonies in Italy, eg the famous Tomb of the Diver at Paestum. Some scholars suggest that the celebrated Roman frescoes at sites like Pompeii are the direct descendants of Greek tradition, and that some of them copy famous panel paintings.

Ancient Greek same-sex love. Fresco from the Tomb of the Diver, 475 BCE

some quotes and paraphrased from:
http://en.wikipedia.org/wiki/Ancient_Greek_Art

Retrieved from "https://peace.fandom.com/wiki/Peace_Art_2?oldid=11311"
Community content is available under CC-BY-SA unless otherwise noted.