For commentary, info and to add your own comments, click here or on the discussion tab above.

(a no parsing zone) 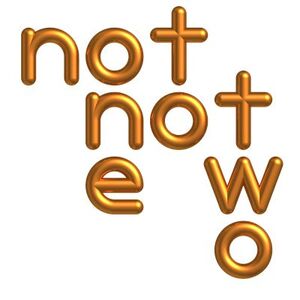 Taoism's wu wei (wu, not; wei, doing) is a term with various translations (inaction, non-action, nothing doing, without ado)
and interpretations designed to distinguish it from passivity.
From a nondual perspective, it refers to activity that does not imply an "I".

Neither from itself nor from another,
Nor from both,
Nor without a cause,
Does anything whatever, anywhere arise.

"Empty" should not be said (or "would be impossible to say"), nor should "Nonempty",
nor "both and neither"; but they are spoken of for the purpose of praj~naptification.
(Causing some gnosis/wisdom, or causing gnosis/wisdom of something; "teaching")

The Enlightened man is capable of perceiving both unity and
multiplicity without the least contradiction between them!
~ Huang Po

"How does one seek union with God?"

"The harder you seek, the more distance you create between Him and you."

"So what does one do about the distance?"

"Understand that it isn't there."

"Does that mean that God and I are one?"

"How is that possible?"

"The sun and its light, the ocean and the wave, the singer and his song ...
not one. Not two."

"False imagination teaches that such things as light and shade, long and short, black and white are different and are to be discriminated; but they are not independent of each other; they are only different aspects of the same thing, they are terms of relation, not of reality. Conditions of existence are not of a mutually exclusive character; in essence things are not two but one. Even Nirvana and Samsara's world of life and death are aspects of the same thing, for there is no Nirvana except where is Samsara, and no Samsara except where is Nirvana. All duality is falsely imagined." (from: Lankavatara Sutra ~ trans D.T. Suzuki)

In terms of practical psychology this means that there is no actual distinction between our ordinary, everyday experience and the experience of Nirvana or spiritual freedom. But for some people this experience is binding and for others liberating, and the problem is to achieve what the Lankavatara calls that "turning about in the deepest seat of consciousness" which effects the transformation.

For what is our ordinary, everyday experience? It is not just our awareness of external circumstances or even such ordinary activities as walking, eating, sleeping, breathing, and speaking; it includes also our thinking and feeling: our ideas, moods, desires, passions, and fears. In its most concrete form ordinary, everyday experience is just how you feel at this moment. In a certain sense Buddhism is very much a philosophy and a psychology of the moment, for if we are asked what life is, and if our answer is to be a practical demonstration and not a theory, we can do no better than point to the moment Now! It is in the moment that we find reality and freedom, for acceptance of life is acceptance of the present moment now and at all times. Acceptance of the moment is allowing the moment to live, which, indeed, is another way of saying that it is to allow life to live, to be what it is now (yathabhutam). Thus to allow this moment of experience and all that it contains freedom to be as it is, to come in its own time and to go in its own time, this is to allow the moment, which is what we are now, to set us free; it is to realize that life, as expressed in the moment, has always been setting us free from the very beginning, whereas we have chosen to ignore it and tried to achieve that freedom by ourselves.

~ from: The Meaning of Happiness ~ Alan W. Watts

A hundred different gourds,
From the mind
Of one vine.
~ Chiyo-ni

It is said that Chiyo, the most famous of women
haiku writers, was asked by the Zen Master of
Eiheiji Temple to illustrate in a haiku the
teaching that a thousand meanings come from
one thought. The above verse is the parabolic
expression of this Zen princple ...
(which is that of Mahayana Buddhism)

For haiku, a gourd is "a part rising from part,"
but it is seen as a whole, though at the same
time as a part.
For haiku, here is There, and There is here.
The above verse reflects the state of mind which
produces haiku, for it is the one Poetic Mind
which produces all poetry, and in so far as we
share in it we are living ...
There and here now.

is not ...
the view from one's left eye ...
going to be slightly different than
that viewed from one's right?
2 views?
now the brain doesn't reject one view as being
false and the other true ...
but 'sees' both as valid ways of looking.
that the brain can integrate these two views ...
accepting each as a valid representation/point-of-view ...
of how things are ...
allows us to hold both in mind ... as if one ...
and as a result, to add perspective to our 'seeing' ...
to gain us access to a dimension which would not be
available were we to view from one OR the other.
duality?
yes.
indeed.
two 'views'
nonduality?
yes.
indeed.
one 'seeing'
not one
not two
just this
-ts-

thanks to Vicki Woodyard for:
"nonduality ... a no parsing zone"
http://www.bobwoodyard.com

Retrieved from "https://peace.fandom.com/wiki/Not_One_Not_Two?oldid=11428"
Community content is available under CC-BY-SA unless otherwise noted.